Nissan is one of the world's leading automobile manufacturers. Although, it is not as large as Toyota, it still manages to make its presence felt in the market. The Japanese car manufacturer has always impressed its consumers with its designs, durability and efficiency. Innovation at Nissan has also been receiving global recognition. 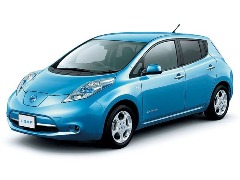 The Nissan Leaf is one example of the innovative approach taken by Nissan. The Leaf was first released in the market in 2010 as the world's first electric car. The distinct difference between the Nissan Leaf and any hybrid car is that the hybrids make use of an electric motor combined with a petrol or gas engine. The Leaf is a car that runs on electric motors only.

The Leaf is a small compact hatchback. It may be a small car but has impressed consumers and critics with its features and performance. The Leaf has a great acceleration, which is quite surprising for people. A normal petrol or gas engine is much more powerful than an electric engine, yet the power that the Nissan Leaf has to offer is impressive. With a top speed of 90 mph the car has the ability to go from 0-60 in just 8 seconds. It is powered by an 80KW or 107 hp electric motor and that makes use of a 24kW lithium-ion battery pack.

The Nissan Leaf's design attributes are similar to any normal hatchback. It has a spacious and quiet cabin equipped with ample features and an efficient navigation system. However, the storage space in the trunk is limited for a small car.

The car has zero emissions and zero expense on fuel: no need to worry about standing in line at gas stations. But the biggest disadvantage is that the car has limited travel range of 100 miles. The need to constantly recharge the motor is a bit painstaking for owners. The handling, stability and overall performance have been receiving words of praise on the other hand.

The 100 mile travelling range of the car is only an estimate. The driving style plays an important role in defining the total distance that the car will be able to travel. Employing other features of the car like the gadgets, head lights and heating/ cooling systems also has an effect as they determine how much power from the batteries they consume.

Because the Leaf is the first all-electric car of the world, it has provided Nissan a competitive edge in the market. It has also provided a chance to capitalize on the opportunity as there is no competition what so ever. However, the car still has to face many challenges as it is still a new technology. It needs improvements as well like an improved travel range and more powerful motors.

The Nissan Leaf is all in all a proper family compact at an affordable price. It might not be very elegant and beautiful to look at, but it has its advantages that define the futuristic approach that Nissan is taking with its new models. There are high hopes from Nissan as consumers all over the world expect Nissan to continue redefining the benchmarks in the automotive world.