Believe it or not, cars are pretty much living creatures. Like humans, they require care and attention. They desire to stay in the best shape and health. If they are ignored and their problems are overlooked for too long, they have their own ways to demand your attention. So, whenever there is something wrong, cars start making noises.

This is how they communicate with you but unfortunately they can't really talk to you about it. When you finally start to take notice of the noises, it is up to you to decipher the meaning of the message delivered to you by your friend. Experts and enthusiasts are good at translating and understanding the issue, but are you? 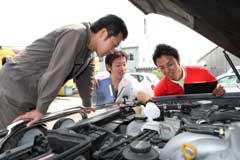 Backfiring
Backfiring is a sound heard pretty commonly but it is quite scary if you are in the car. You will usually hear it when you start the engine or pump the gas pedal in the middle of the road. This noise usually comes from the ignition chamber. Check for ignition faults such as faulty timing or a leaking valve.

Popping
A popping sound is pretty much like backfiring but it is a bit louder. If the pop comes from the exhaust, you might want to take a look into the fuel filter. If the fuel-mixture is leaning out, your car will pop when decelerating. It is advisable to have an expert take a look into the matter before things turn for the worse.

Knocking
Knocking is also quite common in cars especially if you are a frequent driver. Knocking is usually caused by loose bolts or bearing. If you experience knocking while turning your car, there is a chance that your wheel bearings need some attention. However, knocking is also caused due to loose bolts in the torque convertor or an issue with the driveshaft center bearing.

Hissing
This is a noise you can easily identify and differentiate from others. If you hear hissing under the hood, there is one major suspect - a leaking hose. The problem is finding the leak in that entire jumble under the hood. A skilled hand can definitely help you here but if you have eyes keen enough to find the leak yourself, use duct tape as a temporary bandage. Other than leakage, hissing may also be caused by a brake booster failing.

Squeaking
If you hear squeaking in your car, don't waste a second before getting your brakes checked. In most cases it is a worn out brake component such as drums and pads. If the squeaking is continuous even when you are not pushing the brakes, then it could be because of low air pressure in the tires or an alignment issue. In any case, squeaking should not be taken lightly as faulty tires and brakes are the major reasons behind traffic accidents.

Rattling
Rattling could be coming from anywhere; the hood, the front, the rear or from inside the cabin. In any case, rattling may indicate loose bolts somewhere in your car. You should immediately get your car checked properly in order to avoid any kind of mid-road catastrophe.

Other common sounds include thumping which is probably an indicator of a flat tire, flapping which is usually caused by worn out belt or something integrating with the fan and the grinding sound which could be a transmission issue. Anyhow, it really pays to known your car and the noises it makes when you drive. Take these noises as an alarm and get the issue properly diagnosed and treated through a mechanic.