During the early 2000s, Toyota Prius initiated the mission to bring practical green cars to the street. Now as the new decade has started, we can already see how successful its journey has been. While it has become a really popular choice, it has also triggered many other manufacturers to jump on the green bandwagon. 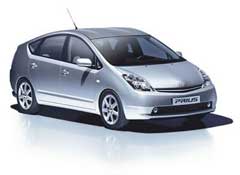 With 2012 approaching us already, Toyota has a new surprise waiting for the eco-lovers, it is the 2012 TOYOTA Prius Plug-in Hybrid, a new zero emission Prius promising fuel efficiency of 61.0 km/liter. The new plug in hybrid Prius is expected to hit the streets from the beginning of 2012. However, it won't be available for all the states until 2013.

What Looks New
When Toyota Prius first arrived, it didn't receive much praise for its looks. Prius has always been a really simple car with no-nonsense styling. However, this simplicity is what became its hallmark. During the past few years, we have seen countless hybrids copying the same outlook. The upcoming Prius does not look any different - except for the PHEV decals.
The 2012 Toyota Prius hybrid will be offered in two trim levels – basic and advanced. If advanced is what you choose, you will get a better looking car with unique styling and features including automatic LED headlights.

What is New
The real change is under the hood of the upcoming Prius. It will be using Hybrid Synergy Drive. Its 1.8 liter four cylinder VVT-i gasoline engine will be able to produce 98 hp @5200 rpm. This engine is coupled with a pair of high-output electric motors. One of these motors produces 42 kW or 56 hp and works as a starter for the gasoline engine. The other one churns out 60k kW or 56 hp to power main components. That makes the combined output of the 2012 Prius somewhere around 134 bhp.
Since it is a plug-in hybrid, it will also be using a lithium-ion battery placed under the rear cargo floor. It can store up to 5.2 kWh of charge. Three different batteries are used in Toyota Prius PHEV. The vehicle will operate in all-electric mode until the first two battery packs are depleted. When down to the third battery, Prius will operate as a typical hybrid vehicle.

Performance, Capacity and Econom
During a road test, Toyota Prius plug-in hybrid accelerated from 0 to 60 in just 10.7 seconds while it reached the top speed of 112 mph. When in all electric mode, it might not exceed the limit of 62mph. In order to get the desirable performance, customers will be able to choose from three different modes; the all electric mode, Eco mode (hybrid) and Power mode (hybrid).
It will be able to deliver fuel efficiency of 61.0 km/L. Road tests have also confirmed that the upcoming plug in Prius will be able to give a good 49 mpg on the highway and the battery power alone is enough for 15 miles. The battery will hardly take 2.5 to 3 hours to get completely charged.

Features and Safety
The 2012 TOYOTA Prius Plug-in Hybrid is a safer car than all the previous Prius. It will come loaded with numerous safety features on standard. Features such as antilock disc brakes, stability and traction control, front side airbags, a driver knee airbag, full-length side curtain airbags and hill start assist are all available with the base trim, the advanced will also have a pre-collision warning system as an option. The upcoming Prius also manages to get a full-five star crash test rating.

The Final Impression
The 2012 TOYOTA Prius Plug-in Hybrid will prove one thing for sure, PHEVs are way better and cooler than the HEVs. While offering amazing fuel efficiency of 61.0 km/L, the Prius will also deliver a joyous and wonderful drive in its super-quite cabin. So, if you are among the considerate customers who are looking for an economic ride to buy, the 2012 TOYOTA Prius Plug-in Hybrid is definitely a car worth waiting for.