There are tragic automobile accidents occurring all over world. When the car is moving at or beyond 100 km /h you are travelling at high speed. At this speed when car strikes it suddenly comes to halt from such great speed. Due to which results are very drastic.

Seatbelts are used in cars since many years. In the beginning there were many debates regarding whether seatbelts really give any protection. They serve as a passive restraint in cars. Almost all the countries have adopted seatbelts as safety measure in cars. With time statistics have also proved that seatbelts have saved thousands of lives from car accidents. Similarly airbags are also very effective means to prevent from getting hurt during accidents. They are the soft pillow cushions, which spreads the thrust of the strike and minimizes the shock. 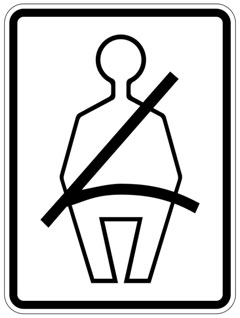 Since year 1998 airbags are made compulsory in United States for both passenger's seat and driver's seat. Airbags have helped to reduce the frontal crash injury to around 30%. The seatbelts and airbags installed in cars as safety measures work on laws of motion which is needed to be understood in order to understand how the airbags and seatbelts work?

The object that is in motion has certain amount of momentum, which continues to move until and unless some outside force do not stop it. In order to stop a moving object certain amount of force and time is required. When the car is moving on certain speed, the passengers are also moving at the same speed with car. Therefore, if the car suddenly stops, still the passengers inside are moving at the same speed, this leads to some drastic crash and passengers are very seriously injured or even dead. Hence the airbag tries to bring the motion of the passenger from certain speed to zero speed within fraction of second by inflating itself in between the passenger and the steering wheel or dashboard. This helps to protect the passenger from getting hurt by minimizing the speed rather than bringing it completely to halt.

Similarly the seatbelts also work on the laws of motion. The role of seat belt is to stop the passenger from jumping off the seat and dash into the car objects during car crash. When the car moving at the speed of 100 km / hour suddenly comes to halt or strikes something, the seat belts helps to restore the inertia of passenger travelling at the same speed and help to minimize the risk of getting seriously injured. The seat belts are produced from cloth with good flexibility. Therefore when the car crashes it gives the passenger or driver space and time to come to halt without bouncing in the car. The shoulder straps and lap belts help to restraint the passenger at the sturdy parts of the body. This leads to small bouncing of body of head in the car rather hand huge impact that can damage the body or lead to death.

Both seat belts and air bags increase the security and safety of car. Seat belts help the passenger to restraint the crash and prevents to bounce in the wind shield. It does cause little bit of head jerking. This can be prevented with the help of air bag. When the air bag inflates it protects the head from jerking and body from any spinal injury. Therefore composition of both airbag and seat belt is a great life saver equipment in car. 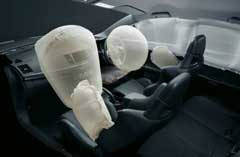 So whether you are driving in the city or on high way and at whatever speed, wearing seat belts should be mandatory. Accidents can happen anytime and anywhere. These are not planned incidents; these are unfortunate accidents which can be made less painful and less severe with the help of seat belts and airbags.