About 35% of countries have the steering wheel on the wrong side of the car. Besides the Australians, Brits, and a number of other nations, Japanese drivers also use right-hand drive cars. 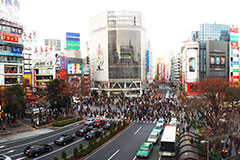 As for the English-speaking fellows, well they like to be special and follow the way Roman troops marched. But why do the Japanese use the same right-hand drive? Believe it or not, it has to do with the samurai and trains.

One might easily wrap his mind around the train influence, but the samurai are not such a straightforward guess.

The Samurai vs Right-hand Drive - What's the Missing Link?
Japan is a strictly regulated country and most of the regulations didn't just appear overnight. Rewind a few centuries to the Edo Era (1603 -1868) and the country had a set of well-established rules regarding road usage. This is also the time when the samurai ruled the streets of Japan.

The obvious question is: What does the Edo Era have to do with right-hand drive cars since cars hadn't been invented yet? In essence, driving on the left has little to do with cars. Quite the contrary, it's all for the convenience of the samurai and Japanese road usage logic.

The official acceptance of using the left side of the road came in 1872 and it coincides with the introduction of the railway.

Japanese Railway and Right-hand Drive
As the Edo Era ended and the Meiji period (1868 - 1912) ensued, Japan no longer needed the samurai but rather trains were in high demand. On the other hand, the country did not have the capacity to build a railway system on its own during the Meiji period.

France, Britain, and America offered to lend a hand and as you can probably guess, the British won. So thanks to the Brits, all of the trains run on the left side of the road. Electric trams and horse-drawn railways followed. And once the first cars appeared in Japan at the beginning of the 20th century, it was logical for them to abide by the left side rule. A law was finally passed in 1924 mandating left-side driving for cars, and it stuck to this day.

Some speculate that Japan would also have been a left-hand drive country had America won the railway contract. But it doesn't seem that the Japanese fared poorly with their British left-side railway. Today, rail transport is the main mode of transportation for millions of the country's residents. In addition, Japanese railway is famous for being the most timely and well-operated in the world.

Are There Any Exceptions?
For a short period of time, Okinawa was the only exception to right-hand drive in Japan. Upon Japan's defeat in the Second World War, Okinawa came under American rule. The government had its base on the Ryukyu Islands and it lasted from 1950 to 1972.

Among other things, the Americans introduced left-hand drive which was in effect over the 22-year period. Okinawa came back under Japanese rule almost a year after the final agreement was signed in the summer of 1971. So, as soon as the Japanese reclaimed their territory, they reinstated the right-hand drive.

Endnote
It is interesting how different historical and cultural influences shaped contemporary road regulations in Japan. From samurai to contemporary Shinkansen, the Japanese have a long tradition of using the left side of the road. It might look and feel strange to Europeans and Americans, but the system works like a well-oiled machine for the numerous Japanese who depend on it.