Your vehicle's battery is the beating heart that gives it electrical power, as opposed to the engine's mechanical power. If it dies, then you can't use your car. But sometimes dead batteries can be revived. In other situations, you may need to replace it. 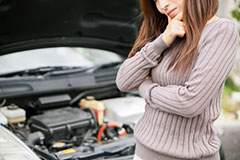 How can you tell the difference? You don't want to buy one unless you have to, though when a car won't start most drivers would hope against hope that it's the battery - as it's probably the least costly.

Keep reading to find out what to do with your dead car battery. And learn the signs that you need to replace a battery before you're stuck with a dead one.

Signs that Your Battery is Dead
Vehicle batteries don't often die without warning. But many people don't know the warning signs to watch for. They may include:

Your Engine Cranks but Doesn't Start
First, if your vehicle engine cranks but doesn't turn over, the most likely problem may be your battery. Even if you have a device that says that your battery is good, it still may be missing the necessary volts to start the engine.

So it's a good idea to get it checked out by a mechanic. It may also be a problem with the alternator that converts the engine's mechanical power for recharging your battery.

Your Engine Doesn't Crank or Start and There are No Lights
Next, if you try to start your car and it doesn't start much less crank you may have a dead battery. It's even more likely if the lights also won't turn on because the battery powers your car's accessories.

How Long Does a Car Battery Last?
Vehicle batteries are designed to last several years. But the actual lifespan depends on the type of battery and how you use it.

Generally, the life of maintenance-free batteries is 4 to 7 years. If you notice that your car battery life is short, only 3 to 4 years, you may have other vehicle problems that is affecting battery life.

What to Do About a Dead Battery
If you have a dead battery, the only thing you can really do is replace it. However, here are some options to get your car running long enough to get to a safe place. Keep in mind, though, that some of these options may finish off your battery completely.

Jumper Cables
This may be the first and only option you need to get your car running. As soon as you get your engine running, though, remember to keep it running for at least 30 minutes to fully recharge your battery (if it's not beyond recharging).

Distilled Water
You may be able to add distilled water if the electrolyte level is low. Add enough to fully submerge the plates. This may increase the reaction area and get your engine a few more starts before you need to replace the battery.

Epsom Salt
Epsom salt can change the chemical balance of your battery. And adding this may tip the balance enough to create enough of a charge to start the engine. Try this method by dissolving one part Epsom salt in 3 parts warm water. Add it to the electrolyte mix until the plates are covered in the electrolyte with 1/4 to 1/2 inches to spare.

Keep in mind, though, that if you use this method you may finish off your battery completely. So you may want to try this only in emergency situations.

Final Thought
One of the first and strongest indicators that your battery is dead is that your vehicle accessories don't turn on. That means that the dome light doesn't switch on if you open the door. Or you don't hear car chimes when you put your key in the ignition.

If you suspect that your battery is dead, and it doesn't crank, the only thing you can do is replace it. But if the engine cranks but doesn't turn over, simply jumpstarting it may buy you a little time. Remember, though, that you need to get your battery and engine checked as soon as possible because the battery drain will only get worse (unless it's caused by accidental draining such as forgetting to turn off your headlights).