Some car logos are recognizable around the world. And even if you can't remember the car manufacturer's name, there's a good chance that you would recognize the logo. 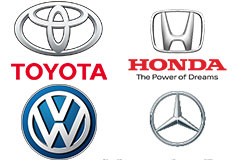 But what's behind these iconic trademarks? Sometimes the story behind a logo is more interesting than the cars themselves.

Find out the origins of these top trademarks and see how it changes your perception of the company. Every trademark has a story. Discover the stories behind your favorite car manufacturers.

Honda
There's no mystery behind Honda's distinctive logo. The stylized "H" is for the company's founder, Soichiro Honda.

Toyota
This logo has three ovals. The perpendicular ovals inside the larger one represent two hearts for the customer and the company. The overlapping hearts signify a mutually beneficial relationship and trust between company and customer.

In addition, the overlapping perpendicular ovals inside the outer one symbolize a "T" for the company wheel. And the outer oval is meant to symbolize the world as it embraces Toyota.

Furthermore, the space in the background also has meaning. The car manufacturer says it represents the "infinite values" they want to convey to their customers:

- integrity in safety, social responsibility, and the environment

Subaru
Subaru has a distinctive blue emblem with six stars. These stars represent a cluster of stars called the Pleiades in the constellation of Taurus. This ties in with the company's name, Subaru, which is Taurus in Japanese.

Mazda
The name of this car company has a couple of origins. The first is a derivation of the company's founder, Jujiro Matsuda. In addition, the company name also comes from a god of wisdom, harmony, and intelligence from early Asian civilizations, Ahura Mazda.

Its current logo has a stylized "M" that is supposed to evoke wings in flight. This represents the company's flight toward the future. Looking at the stylized "M" you also see a "V" in the center that spread like an opening fan. The center represents the company's flexibility, vitality, creativity, and passion. And the circle that encompasses the entire emblem represents a willingness to spread metaphorical wings and enter the 21st century.

Volkswagen
The "V" and the "W" of the logo are simple representations of the name. In German, "volks" means people while "wagen" is a car.

BMW
Contrary to popular belief, this famous luxury trademark doesn't represent propellers against a blue sky. Instead, the blue and white represent the national colors of Bavaria. BMW was originally formed from another company who had a roundel design in their logo. They reused the roundel part and put a mirrored image of the Bavarian colors in the center of it.

It's derived from two coat of arms. One is the coat of arms from the former Weimer Germany's state of Wurttemberg. The other coat of arms is from Stuttgart where the Porsche headquarters is located.

The horse in the middle of the logo was taken from the Stuttgart's coat of arms. It's meant to represent the stud farm where the city was built. While the antlers and red and black stripes come from the crest of the kingdom of Wurttemberg.

Mercedes-Benz
The three-pronged star is a representation of the company's desire for their engines to dominate land, air, and sea.

Final Thought
Companies put a lot of thought into their branding. They know that logos and trademarks help customers remember and recognize their products. And while some have intricate thought and symbolism behind their emblems, others are memorable because of their simplicity.