Back in the days, all cars had long whip antennas. They were usually mounted on the roof, on the driver's door (between the door window and the windshield) or on the trunk cover if the car was a sedan. 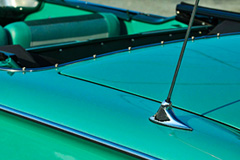 Even though they've completely disappeared in recent years, car antennas haven't. The antennas have only become smaller, more discreet, and more technologically advanced than their clunky old predecessors.

In fact, today's cars have over 20 different antennas for the various onboard electronic systems. In this article, we will investigate the fate of the classic retracting car antenna and answer why they're no longer in use.

The Long Antenna
The classic long antennas were used to capture radio signal, most notably on long and medium waves. Since they were used for AM waves (longer waves translate to lower frequencies), their length had to correspond to the length of the waves they were used for. Most commonly, they came in quarter-wave whip form, meaning they measured only a 1/4 of the wave's length.

Usually, those long antennas were made of metal and came in two main variants - non-retractable and retractable. The former type was more prevalent on the cheaper cars and it's non-moving once it was fixed on the car.

The retractable type, however, was made of a series of telescopic metal tubes and could be hidden within the car's body. Retractable antennas found on more affordable models had to be adjusted manually, while the more exclusive models came with antennas which could be retracted or elongated from within the cabin by pressing a button.

What Happened to the Long Antenna
The main reason the classic whip antennas fell out of favor with car manufacturers is the advancement of technology. In recent years, AM broadcasting has been replaced by high and very high frequency broadcasting (which translates to short wavelengths), thus making the old whip antennas obsolete. Along with the changes in wavelength, cars also began using satellite radio, Wi-Fi, and a host of other communication technologies.

Aside from the change in technology, whip antennas had other things going against them. The first one was their fragility. They were usually thin, long, and made of several telescopic tubes, so they were easy to bend and break. Their construction also made them relatively easy to rip out and steal.

Another reason for their retirement hides in fuel economy. Starting in the late 20th century, manufacturers began looking to minimize the fuel consumption rate of their models by any means necessary. Aerodynamics became one of the focal points of the fuel economy research and whip antennas quickly fell out of favor due to the fact that they increase a car's drag coefficient.

Today's Antennas
Today, some cars have around 20 antennas in addition to the radio antenna. Some are used for Wi-Fi or satellite radio, while the others are used for GPS navigation and communication with infrastructure and other vehicles.

Some of the most popular places to install an antenna on a car include:

Roof. The roof is still among the main places where car manufacturers install antennas. Small fixed antennas have replaced the classic whip variety and are most usually found just above the rear window.

Mirrors. Vehicles with big side mirrors, such as trucks and SUVs, often have high-frequency antennas built into them. These can include telephone antennas, GPS antennas, FM antennas, and SDARS antennas.

Trunk cover. The trunk cover is still a popular place to install an antenna, especially on family and executive sedan models, as well as convertibles and roadsters.

Windows. The trend of integrating antennas into windows began in the 1980s by premium car manufacturers. It soon spread like a wildfire and by the time the 90s rolled around, virtually every car had an antenna combined with the rear window defroster.

Spoiler. Antennas can also be installed on or within the spoilers. In racing cars, they are used for communication with the team. Regular road cars can have a large number of high-frequency antennas installed on/within the spoilers, making it the second-most popular place to install an antenna.

Conclusion
Back when the AM radio was the only entertainment available in a car, whip antennas ruled the scene. Today, however, they have been replaced by their younger, smaller, stealthier siblings.