While most will already be aware of the larger Japanese auto manufacturers, such as Honda and Toyota, there are also a number of other smaller manufacturers in the country who are capable of making good quality or, at the very least, interesting types of cars.

Mitsuoka is one such company and they have built their reputation on creating what essentially amount to replicas of more famous vehicles that are, generally speaking, much more accessible to the average buyer than the real thing. 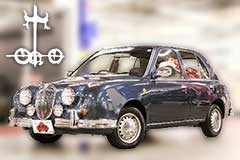 Founded in 1968 but achieving a level of prominence in the late 1970s, Mitsuoka's cars are often very similar in style to cars from other manufacturers. In particular the company takes inspiration from the classic era of British prestige cars, with a number of their models mimicking vehicles such as those produced by Rolls Royce.

Outside of this the company also engages in a practice known as coachbuilding, in which it will take the framework of a vehicle such as those built by Nissan and replace the bodywork with their own custom design in an effort to give the car a more personal touch. In fact the company's current business model includes producing vehicles that are similar in build to those created by Nissan and Infiniti.

The Cars
While some may balk at the thought of purchasing a car that appears to be very similar in style to a more famous brand, Mitsuoka have managed to maintain a good reputation thanks to their vehicles providing a high level of build quality at a more affordable price for the mainstream driver. Their most famous vehicles include the following:

The Orochi series is an extremely bold car from the manufacturer and is considered their only brand of sports car. Experiencing a limited production run following its unveiling in the early part of the century, the vehicle and its variants have become something of a collector's item over the years, despite the fact that some reviewers expressed concerns about its design. Despite this the car has gathered something of a fandom and is one of the more unique sports vehicles available on the market today.

The Mitsuoka Cute is perhaps amongst the most famous of the company's vehicles and fans of the Nissan March will likely be able to notice almost instant similarities between the two vehicles. Regardless the car again sports a unique design crafted by Mitsuoka and is an interesting little city car that has garnered some level of popularity for its ease of use.

The Galue is the company's entry into the luxury car market and enthusiasts will instantly spot interesting homages to the likes of Bentley, especially in regards to the chrome grille. The car has actually been based on various types of Nissan over the years, including the Nissan Crew and Fuga, but it maintains a personality of its own thanks to more closely resembling the classic British cars of old.

Finally the Himiko goes a similar route, only this time the design is more reminiscent of classic English roadsters, such as those that were produced by the likes of Jaguar in the 1960s. Taking its inspiration from the Mazda MX-5 NC, the car is another unique entry into the pantheon of Japanese vehicles.

The Appeal
At the end of the day it's obvious that Mitsuoka's brand of vehicles are probably not for everybody. Some will question why the company produces models based off other manufacturer's vehicles and with bodywork that is inspired by older generations of car. Regardless the company maintains a level of popularity in its native Japan and offers an affordable way to obtain fairly unique vehicles for the current time period.