Safety Tests Show Japanese Cars Are The Best In An Emergency - Vol.242

Safety is one of the most important factors to look for when buying your next vehicle. You never know when the worst is going to happen, so it's important to make sure that you're driving around something that can withstand the impact of a vehicular collision.

In response to the growing demand to make cars safer, both automotive manufacturers and private organizations conduct extensive crash tests on every vehicle model that hits the road. These tests review the quantity and effectiveness of safety features within the vehicle to reduce the loss of life and personal property in the event of a collision. One notable non-profit organization in the field of vehicle safety puts out an award for the "Top Safety Pick" of the year ever year with one country coming out ahead for having the safest cars on the road. 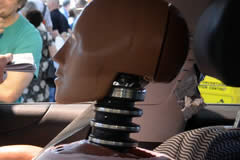 Japanese Cars Rank Highest In Crash Tests
Of all the tests that were performed on small to midsize cars, the Japanese car makers Toyota, Subaru, Honda, and Mitsubishi were the car makers that took up a majority of the list. During each of the crash tests, there were 5 categories that were tested to satisfy safety ratings. Those include:

For clarification, the small and moderate overlap tests are front engine collisions that simulate what would happen if vehicle were to smash into another car, a wall, or even a pole straight on. During the front small overlap test, a vehicle is sent at 40 mph toward an aluminum barrier that is 5 feet tall and is directed to hit a small portion of the vehicle on the driver's side like one would expect from running into a telephone pole. During the moderate vehicle overlap, the vehicle is tested at 40 mph and strikes into a barrier hitting 40% of the front of the vehicle.

During each of the tests, the car is video taped and measured for total impact and the condition of the test dummy inside. Researchers determine whether or not the air bags were deployed, the seat belts locked, and the chance of someone surviving the crash or walking away without serious injury.

Small Vehicles
The Honda Civic was perhaps one of the safest small cars on the road, receiving some of the top ratings allotted. The Civic has consistently been at the top of the list for the past few years; in 2013 they sold over 300,000 vehicles just in the United States alone; the list of small-sized vehicles was also shared by the Mazda 3, and the Toyota Prius.

SUVs and Large Vehicles
Perhaps the only category that Japanese cars didn't dominate in was the SUVs and large size vehicles. In this category, the safest small SUVs were found to be the Mazda CX-5, Mitsubishi Outlander, Toyota Kluger and the Subaru Forester; however, the safest midsize to large SUVs were made by Volvo, Acura, and Mercedes.