Proton is a fairly new name in the automobile manufacturing market but it is fast building a reputation as a builder of quality cars that are certainly worth the attention of enthusiasts. Based in Malaysia, the company was first created in 1983 and, for a while at least, it was the sole manufacturer of vehicles in the country. This offered the company a number of benefits, not least of which was a lack of competition on the domestic market for almost a decade. This, in turn, allowed them to more accurately tune in to the requirements of the Malaysian public and create a range of cars that are great to drive and serve all of the needs of their customers. 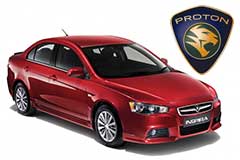 The domestic market
As mentioned, the company is something of a major force in the Malaysian automobile market and in recent years has begun to redouble their efforts to produce high quality cars that suit the needs of the Malaysian public. In fact, until recently the company was owned by Khazanah Nasional, which is the recognized investment company for the main government of the country. However, as times have moved forward and other manufacturers have entered the market in Malaysia, it was decided that the company would be better served by being owned privately, resulting in its purchase in 2012 by the DRB-HICOM conglomerate.

Since that handover of power a lot of changes have been happening within the company. It is beginning to focus less on its partnerships with more famous manufacturers and is instead fully focused on maintain and building upon its reputation in domestic markers whilst also looking to expand into international territories. A range of management changes have already happened and the company is currently in the process of launching an array of new vehicle models that they hope will firmly re-establish them as the top manufacturer in Malaysia.

International partnerships
Proton's international expansion has been helped at numerous points thanks to the company's willingness to enter partnerships with a number of other prestigious auto manufacturers. The company's alliance with Mitsubishi in particular was extremely important in its early expansion efforts and, for a time at least, Mitsubishi actually owned a sizable chunk of Proton and employed the company to work on the manufacture of a number of its badge models.

Over the years Proton has formed other partnerships that have further increased its influence outside of its native Malaysia. A partnership with Citroen enabled the famed French manufacturer to enter the Malaysian market in exchange for Proton being able to work with engineers at the company, while a relationship with Youngman has allowed Proton to explore the burgeoning Chinese market and create something of a foothold there. In fact, this particular relationship continues to bear fruit for the company and they are currently working with Youngman on a number of new vehicles that the aim to introduce into the country.

Finally, the company has recently partnered with Honda in an agreement that will see both work together to create new technologies and a product line that will share the developments made by each company with the public at large.

Competition
Like many great vehicle manufacturers before it, Proton is also very keen on establishing a name within the competitive market and the company has maintained something of an impressive presence in motor sports almost since its inception.

Proton's specialty is rally vehicles and a number of Proton makes, such as the Proton Saga rally cars, made quite a dent in the world of rallying during the 1980s and early 90s. The company continues to maintain a presence in the rallying world and has quickly become a respected name amongst car enthusiasts as a result.