Manual transmissions are slowly but surely going out of style as more and more cars are built to be automatic. In fact, most everyday vehicles that you see on the road have already made the transmission to a more convenient style of driving. Today, the only types of cars that have remained loyal to their traditional manual transmission are for the most part sports cars and large work trucks. 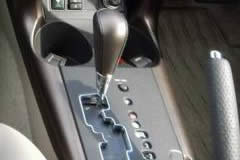 What's A Transmission
Before the difference between an automatic and a manual transmission can be spelled out, it helps to understand what a transmission does.

A transmission is responsible for taking all the power produced from the engine, and translating that information to your tires so that they can begin moving. Think of it like a bicycle with a set of gears. When you begin to peddle the bike, your body (the engine) is producing the power, but it isn't what's actually making the bike go. The power from your feet on the pedal is rotating a chain around the gears, and causing your tire to move.

On that bike, when you shift the gear into the lowest setting, you have to paddle very fast to maintain the same speed which can be comparable to a car's RPMs; however after a certain point, you can't go any faster until you increase the gear on your bike. Eventually when you reach the top gear you are maxing out your speed by peddling slow but peddling harder (increasing torque) to produce those speeds.

The Difference Between The Two transmissions
When that information is translated over to a car, the same concept applies although it is a bit more complicated. A manual transmission is composed of a clutch (bike shifter), a flywheel (the chain), and a gearbox (the gear wheels). When the engine produces power, it begins to turn the rotating pistons located within the engine. When the engine produces power the flywheel and the clutch disk spin narrowly, like a bike chain, separated by something known as a pressure plate.

When the operator of the vehicle pushes down on the clutch pedal?or change the gear?it removes pressure from the pressure plate and eliminates the power just long enough so that the gear can be changed. In most cars, the operator of the vehicle is able to change the gear to whatever forward gear they want at any point during driving. Racecars use manual transmissions because they are much lighter than an automatic transmission and allow the professional drivers to be more in control the amount of power being delivered by the vehicle.

Automatic and Manual Transmissions available For Import
Whether you prefer automatic or manual transmissions, PicknBuy24 has a good selection of used cars to choose from. We export vehicles to customers worldwide and offer fantastic prices on all our vehicles. So take both types of transmissions out for a spin and see what you think for yourself.