There's been a lot of hype in recent years about which region produces the better vehicles, the Europeans or the Japanese. Although European manufacturers have long been a powerhouse in the industry with some big name models such as Mercedes, BMW, and Volkswagen, the Japanese have made significant strides in the last 20-30 year to create a serious impact on market shares.

Depending on who you ask, you might receive a bunch of biased replies based on what that individual has parked in their garage; however, regardless of anyone's preference, there are in fact some distinguishable differences between the two vehicle manufacturing regions that can impact what car might be right for you. 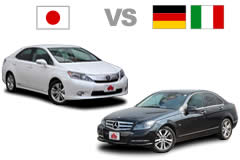 Performance
In terms of performance power and how well the vehicle operates on the road, you'll find that European vehicles are hard to match. Some of the top name European models are known for their speed and maneuverability which-to date?can't be compared to most Japanese alternatives. In fact, the Europeans have had a long history with racing cars and competing against each other to make the next fastest things.

The Japanese do have the Nissan GT-R Nismo which is perhaps a more affordable alternative to some of the fastest European cars if you're looking for speed. The Nissan GT-R Nismo features approximately 595 horsepower and can go from 0-60 in just 2.7 seconds. The premium automaker Lexus also comes out Japan and is owned by their parent company Toyota. Although the Japanese might not have the fastest cars on the road, they are the go-to automaker if you are looking for speed at a more affordable price.

Reliability
In the mid 1970's, German vehicles were at their prime for quality build and reliability. They were consistently used as a benchmark in the industry for the ideal vehicle. Into the 1980's and 1990's, the major European automakers began to cut production costs in an effort to increase profits. Where they decided to cut some of the costs wasn't so much in the interior of the vehicle where drivers would notice, but instead in the mechanical aspects and from where they purchased their parts.

The price cuts that took place led to some serious backlash among auto enthusiasts and owners of some of the newer European models because these cars began to develop more and more problems. What emerged from this scourge of what was an impeccable record by European automakers is that Japanese cars started to improve in every way.

From the parts they used in the manufacturing of the vehicles to the features they included inside the cars, Japanese become one of the best buys in terms of reliability. In more recent years, the Honda Civic in particular has been one of the most popular selling small car brands because of its reliability, high ratings for safety, and fuel economy. In addition, the Lexus has done a great job battling it out with Mercedes and Audi in the luxury car category for price, design, and quality.

Design
If there is one category that the Japanese automakers have yet to surpass the Europeans in, it's the design of their vehicles. Regardless of anything else, the Europeans make some of the best looking vehicles on the road. For instance, the ever popular and recognizable Lamborghini that comes out of Italy, and the Porsche that is designed in Germany.

So, Which Is The Best?
Both European and Japanese vehicles are some of the best cars in the world to buy. In terms of reliability, performance, and design, you won't be able to find better; however, one might say that the Japanese cars are better vehicles overall in the categories that truly matter. Ultimately, that's for you to decide.