Watching any type of smoke come out from underneath the hood can be a scary sight to witness. Most motorists generally associate car engine smoke to have to do with some serious and significant repair, and begin to fret over the impending cost that will be associated with fixing the problem; however, before you start to panic you should know that your car engine could be smoking for a number of different reasons. Here are the most common reasons that your car engine might be smoking to provide you with some relief and help you to determine if it's time to buy a new vehicle or if it's just a simple repair. 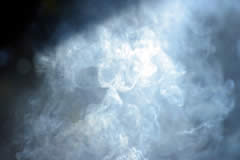 Black of Grey Smoke
Black or grey smoke is perhaps the most common colors of smoke arising from underneath the hood. This could signify something as simple as a clogged air filter or oil leak, but could also mean some more serious problems like problems with the carburetor. Either way, black or grey smoke is most commonly indicative with problems with the engine's fuel combustion.

The first thing you should do is check the air filter and see if it is seriously clogged and might be causing these problems. If that isn't the case, next thing you should do is check if the oil is leaking. Most auto repair shops will sell you a liquid substance you can pour into the oil container to that allows you to easily check to see if it is leaking. If neither of these solutions remedies the problem, you'll need to take your car in to a mechanic to have the car diagnosed.

Blue Smoke
Any type of blue smoke that you might be seeing has to do with some problem with the oil. Blue smoke is also usually accompanied by a sulfur type smell that is emitted by the burning oil. The two problems that are most likely causing the blue smoke are:

Both of these problems will need to be diagnosed by an experienced mechanic as soon as possible.

White Smoke
If you see white smoke in the air, it most likely has to do with the coolant fluids in your car. On days with very cold weather, you might see white smoke emitting from underneath the hood of the car, but don't worry this is normal and does not indicate that there is a problem with the vehicle.

If it isn't cold outside or the white smoke continues to persist, it is a problem with your engine overheating. This could be due to a leaking head gasket or a cracked cylinder head. A cracked cylinder head is perhaps the worst case scenario for any type of smoke coming out of the car. When you take the vehicle into a mechanic, they'll look at the engine to determine whether or not they'll be able to repair the cylinder head. If they can, the cost can be anywhere from $500-$2,000. If it can't be replaced, that value can increase anywhere from $5,000 for a used engine, to over $10,000 on a new engine.

For serious issues related to the vehicles and the engine, you may be better off making the more economically sensible choice of buying a new car. PickNBuy24 is an international import automotive import company that ships their vehicles to Oceania and the Caribbean. Their gently used cars are in great condition and can cost you just a fraction of what it would take to replace the engine on your car or to make major repairs to eliminate smoke. Head over to their website to view the full selection of vehicles available.