Just by looking at the many different types and colors of cars on the road, you'd think by now that tyre manufacturers would be able to design tyres in a wide range of colors to choose. After all, wouldn't it be nice to be able to mix and match the color of your tyre to match your vehicle, or show off your favorite color? 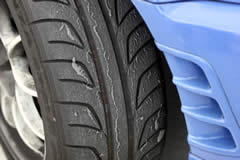 If you look at pictures of old vehicles on the road, you'll see that there was a time where tyres weren't always black. In fact, most tyres used to be all white. The white coloring in a way makes sense because when rubber is first harvested from trees, it is naturally white.

The rubber used for tyres first started to become black when a company known as Binney & Smith contacted Goodrich Tire Company in the early 1900s regarding a chemical component they were selling known as carbon black. Interestingly enough the same Binney & Smith would later become the Crayola art supply manufacturing company that is responsible for making crayons and silly putty.

Where Did Carbon Black Come Into Play?
After acquiring the carbon black chemicals, Goodrich Tyre Company found that when it was applied with the rubber used for tyres, it made the tyre stronger and more durable. The carbon black helped to reinforce the rubber used in the tyre causing less damage to the tyre when it rubbed against the road, and allowed the product to last much longer than it would have been previously able.

The changes that adding carbon black made to the traditional white tyre were enormous. It increased the strength of the rubber by over 1000% percent and helped to reduce the heat being placed on the rubber treads by redirecting it to the carbon black fillers elsewhere. Carbon black has also been found to increase safety on the road. The chemical additives in addition to the innovation in tread design improve traction so that it became less hazardous to drive in wet weather.

Will There Ever Be Colored Tyres?
There have been many cases where tyres were designed in custom colors to make the vehicles stand out. Every once and a while you'll even see older vehicle models sporting white tyres; however, local laws and regulations largely prohibit colored tyres due to their tendency to discolor public roads. Since the asphalt used to create roads and highways is black, is makes sense that a black tyre wouldn't cause anything more than wear and tear that would require the occasional repair.

The good news is that there might be a compromise. Although you might not be able to purchase completely customized colored tyres that use non-black treads, you might be able to customize the look and feel of the visible sidewall of the tyres. There is a process known as 'tyre white-walling' that is offered through many auto detailing and customization shops. To white-wall a tyre means to paint the side of the outside of the tyre for aesthetic reasons, but the tread and the remainder of the tyre will remain black. This doesn't change up the chemical makeup of the tyre and allows you to get as creativity as you want. In 2012, Bridgestone tyre company even announced that they would begin offering a few white-wall tyre designs that are both colorful and unique.

Start Customizing Your Tyres Today
Although black tyres might not be the most exciting look in the world, they were designed for you to get the most of your vehicle. If you're ready to add some color in your life, you might want to consider purchasing a new used car from PicknBuy24. That way even though you can't get rid of the black tyres, you can purchase a quality vehicle to fit your color preferences and style. We ship cars to Africa, Oceania and the Caribbean, so check out their website to view the inventory and import your next vehicle.