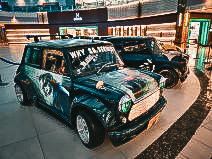 What does a Ricer Car means?

Ricer Car used initially to describe Japanese made vehicles. Many variations have also been used, such as rice rocket for Japanese sport bikes.

However, now a days the term rice car, has taken on an alternate pejorative meaning for an automobile world which refers to a vehicle that has been modified with a lack of taste or quality to give impression of high performance, but does not necessarily have any high-performance capabilities.

This practice is in contrast to a “sleeper” car, where a vehicle may have major performance modifications, but the appearance remains similar to that of a stock model.

When this term is use as an adjective, refers to drivers with little or no automotive, mechanical, or racing experience would modify their vehicles to emulate the more impressive versions of racing vehicles with mixed results. The most immediate criticism of such modifications is usually aesthetic on the part of the person using the term rice.

It believes that the movie “The Fast and the Furious” help the exposure of people to automobile modification, and may have resulted in an increase in the number of cars being modified.

Some sample of this type of modifications are

Digital turbo, consisting of speakers installed under the car that emulate the sound of a turbo engine.

Decorative neon and LED lighting in

Car with any of the aforementioned modifications, yet appears to have sloppy workmanship or has not been properly cared for (dirty, parts of the car with smashed or dented body work, etc.). Also this term has been used for those so-called “identity crisis” vehicles when an individual adds decals, badges or other identifiers from one type of vehicle onto another vehicle of the wrong type, or to a vehicle that does not contain the modifications or special attributes indicated by the accessory. Examples could include a Impreza WRX sporting a VTEC sticker, or a Honda CR-X with a TRD (Toyota Racing Development) badge.Note that in this case not only can affect Asian Cars , American cars can also suffer from this. For example: A Ford Mustang may have a GT badge, indicating it has a V8 engine, but the car may only have a V6 or in German cars where “up-badging” frequently occurs, when a base model BMW 5 series is showing M5 badges.

So tell us what you think is the use correct of the word?

Have you seen anybody driving a rice car?

Do you drive a rice car yourself?

Abstract from the article for a full version of this article please check https://drivehomesafe.com/what-does-rice-burner-means/