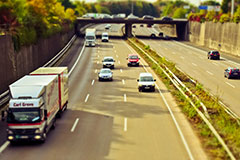 Right sided driving is also the primary orientation for all continental landmasses, while the vast majority of islands and countries separated from their continents drive on the left side of the road. Primary examples are England, Japan, Australia, India and New Zealand which have all adopted left-handed traffic orientation.

The question most people are interested in is "which traffic handedness is safer?".

A study performed in 1969 by J.J. Leeming aimed to resolve this very mystery, though J.J. Leeming himself admitted the evidence he was working with was limited, he did illustrate one possible reason for considering the left side of the road safer to drive on.

In his research, J.J. Lemming noted that this improved safety could be accredited to the fact that humans are more commonly dominated by their right eye rather than their left eye. This is similar to the vast majority of people being right-handed over left-handed.

In left hand traffic, it is the right eye that is used primarily to detect the presence of oncoming traffic as well as the presence of objects in the driver's wing mirror. In right handed traffic, this important responsibility is relegated to the weaker left eye.

J.J. Leeming admitted that this in itself doesn't make right handed traffic any more dangerous than left-handed traffic, but it was a possible contributor to the disproportionate accident rate between the two schools of driving philosophy.

J.J. Leeming's observations have been reexamined time and again, especially their implications to elderly motorists who are notorious for making visual miscalculations when referring to rear view mirrors. Furthermore, there are other factors that add weight to the argument that left handed driving is indeed safer than sticking to the right side of the road.

The typical automobile designed for right handed navigation and employing a manual transmission, will have the gear shift on the right side, this means that when changing gears, only the left hand will be on the steering wheel. With left handed traffic vehicles, the manual gear shift is on the left side meaning the dominant right hand is never taken from the wheel.

The left hand is responsible for most additional controls of an automobile designed for left handed traffic while the right hand remains on the wheel for optimal control.

When observing all other forms of transportation from horseback riding to motorcycle driving, it is more common for the operator to mount their ride from the left side, as they would in a left handed car. Even the motorcycles tilt on a kickstand leaves the driver on the curbside.

Of course the most important safety consideration for the modern motorist is making the switch. Driving in an unfamiliar orientation can be a tricky task, while the operation of the automobile is basically the same; it is those split second reactions when a motorist takes a left when they were supposed to take a right that can be truly problematic.

If you are ever driving on an unfamiliar traffic orientation, take the time to go extra slow, stay alert to the minor differences. In the end, driving a vehicle on either side of the road is equally deadly; the best way to avoid accidents is by staying alert and observing the traffic laws methodically.