The Most Ridiculous Car Accessories on the Market - Vol.333

Since the dawn of the commercial automobile industry, motorists have loved to dote of their vehicles. The automotive industry has obliged this trend by continuously churning out a striking variety of innovative gadgets and accessories for the doting motorist to apply to their car.

But there is always the urge to take this vehicular affection to its furthest point, even the point of being tacky, useless and symbol of poor taste. Following is a list of the 5 most useless accessories people will PAY good money to have applied to their cars. 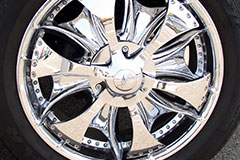 5. Fake Hood Scoops
Hood scoops are a relic of the badass 60's and 70's. Back then one of these devices could add considerable HP to your car by forcing the cold air into the engine through the carburetor. So back then this hood accessory actually served and important purpose as well as adding an aggressive profile to one of those early muscle cars.

Today, air induction systems are in existence, but are not nearly as ostentatious; the cool air comes right through the grill of a modern car with pretty much no need for hood scoops. So those hood scoops are mostly useless and probably just a vent on the roof or even worse just a tacky addition glued to the hood of the car.

4. TV Screens
Why would anyone need to be entertained in the middle of the single most life threatening activity on the planet? Why would anyone want to be catching up on the latest from "Game of Thrones" while navigating the perilous modern motorways? Why would anyone teach their children that this time in vehicular transportation is meant for anything but paying close attention to the traffic outside?

TVs in cars represent a bad combination of technologies with no purpose whatsoever. Even long car trips are made memorable by the things done to pass the time. Mobile devices and TVS in cars should be separated by law and actually are in some countries.

3. Lambo Doors
In the early 90's audiences everywhere couldn't get enough of the crazy doors featured on the DeLorean that went "Back to the Future". The Lamborghini Countach was another great success for the option of doors that open upward rather than outward.

This is another idea that makes more sense on the big screen than in real life. Anyone familiar with the maneuvering out of one of these door systems knows that it is a real hassle. First of all you still have to make sure there is space for the door to open outward, with the added inconvenience of making sure there are no tree branches, roofs or obstacles above the car that can prevent it from opening upward. That will make for an interesting conversation starter on a first date I'm sure, but not a huge symbol of wise consumerism.

2. Headlight Eyelashes
There is no arguing that the perfectly rounded headlights featured on so many adorable automobiles like the mini cooper to the VW bug are cute as a button. This is why the crime of besmirching this design with tacky headlight eyelashes is unforgivable. Sure this kind of thing is going to get a lot of attention but not anything good. Headlight eyelashes seriously reduce the visual value of an automobile.

1. Spinners
Spinners can be bought for more than $10,000 and are sure to send a clear message to everyone who has to see this opulent display: "I have lots of MONEY and very little economic intelligence." This purely aesthetic addition to car is merely a gimmick that has been glorified in movies and shows that a motorist doesn't understand what a vehicle is for.

Final Thought on Useless Accessories
There are no ends to the upgrade and performance enhancers that greatly improve the vehicle's function. While most of these are going to go unseen, addressing the interior of the car is a far better investment than adding junk to exterior.