Customers interested in buying the Mitsubishi Pajero SUV may find that there are several other apparently similar car models manufactured by Mitsubishi, namely the Shogun and the Montero. This can create confusion. What are the differences between them? Which is the better? Which should you buy? Well, in essence, all three names refer to the same model produced by Mitsubishi, the differences between them being quite insignificant. Why the different names, then? Well, in some regions, the car was marketed under different names, for reasons that you will soon discover. 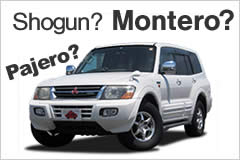 The Mitsubishi Pajero
The first was of course the Pajero, one of Mitsubishi's best-know and most enduring models. The first generation of the Pajero was released in 1982 at the Tokyo Motor Show, as a 3-door, short-wheelbase car. Some of its highlight features included a turbocharged diesel engine, power steering, and suspension seats. The following year, the car appeared at the 1983 Paris Dakar Rally, and two years later, in 1985, it went on to win the competition, attracting a lot of attention. As of 2015, the Pajero is the all-time most successful Dakar Rally car, having won its class fifteen times out of thirty-three races. Talk about performance!

It was Pajero's Dakar wins, coupled with its great offroad performance and powerful and adventurous look, that made it one of the most desired SUVs of the 80s and 90s. The next generations further improved the model, culminating with the current 6G75 3.8L V6 motor and 5-speed automatic transmission, which is available with a 4-door wheelbase as well as a 2-door wheelbase. The upcoming generation of the Pajero, to be launched in 2018, will have a plug-in-hybrid version and a hybrid petrol/electric engine.

The Mitsubishi Montero
In Latin American Spanish, Pajero means 'wanker', or someone who masturbates. As you can imagine, no Latin American would have been eager to drive a big car whose spare tire at the back featured a 'wanker' logo on it. (As an aside, it has become quite a joke among Hispanics traveling abroad to photograph Pajeros and laugh about them)

So it was that before marketing it in South America, Mitsubishi changed the car's name to Montero, which means 'mountain hunter'. It was the same car as the Pajero ? only the name was different. The Mitsubishi Montero was sold not only in South America, but also in Spain and India. Montero has also been marketed in the United States.

The Mitsubishi Shogun
Just like the Montero, the Mitsubishi Shogun is the Pajero marketed under a different name to a different market - the United Kingdom. Why exactly Mitsubishi chose Shogun for the UK market instead of keeping the Pajero is unclear, but it's reasonable to assume that they thought about the Latino population in the United Kingdom, as well as the country's relative proximity to Spain. Besides, the company's marketing staff probably decided that Shogun would be a good name in one of Europe's most competitive car markets. It sounds good, doesn't it?

Conclusion - Don't Let the Names Fool You
If you're shopping for a Pajero, you will want to consider the Montero and the Shogun as well, since they refer to the same model. Be careful, however, at the specs of the models you're comparing. For instance, if a newer Montero or Shogun is in your price range, you may want to go for it instead of choosing an old Pajero. Don't let the names mislead you -- you're buying the same good-quality, powerful Japanese car. Finally, keep in mind that more recently, Mitsubishi has been applying the popular Pajero, Montero, and Shogun names to other, unrelated models.