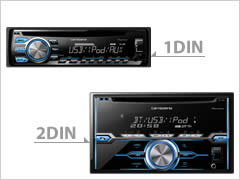 Which Does Your Car Need?
You can either check the product specifications of your current stereo system, or, even better, measure its front faceplace with a ruler. If you have a 1DIN stereo system (it's about 2 inches tall), then you can't replace it with a 2DIN stereo system, which is 4 inches tall. There won't be enough space for the head unit ? it just won't fit.

Is 2DIN Better Than 1DIN?
A 2DIN isn't necessarily better than a 1DIN, although it does have more space for components. The difference between them is in the display. Being taller, a 2DIN has twice as much screen space as a 1DIN. This means that the best touchscreen head units, as well as the best video units, tend to be 2DIN.

Where Does The 'DIN' Come From, Anyway?
DIN is an acronym for the Deutsches Institut fur Normung, the German organization that created the 1DIN car head standard still in use. The original standard specified that a head unit, when seen from the front, should be 180 mm x 50 mm (about 7x2 inches). The 2DIN was introduced later, and, while it retains the same length (180mm or 7 inches), it's twice as tall, so that it looks like two single DINs stacked one on top of the other.

The interesting thing is that neither the 1DIN nor the 2DIN standards come with a fixed depth. This creates a situation in which some car stereos don't fit perfectly into head units which are either too shallow or too deep. This kind of compatibility issue is more likely to affect owners of older cars who try to install newer car stereo systems.

Bottom Line
In the end, when replacing your car stereo, remember that a 1DIN front head requires a 1DIN stereo, while a 2DIN is compatible with both a 2DIN and a 1DIN car stereo, though you may prefer the former for perfect fit and aesthetic reasons. Keep in mind that issues with the depth of the stereo may also arise, especially with older cars. So whether you buy your new car stereo from a local shop or order it online, make sure there's a return policy available, as this allows you to return the new stereo if it doesn't fit perfectly and replace it with another.