The Secret of the Unbreakable Toyota Land Cruiser - Vol.268

The Toyota Land Cruiser is, without a doubt, one of the most durable, reliable, and ultimately unbreakable 4x4s that has ever been manufactured. Capable of withstanding any environment, of crossing rivers, of climbing to the 6th checkpoint of Mount Fuji, and being an all-round hardy and dependable vehicle that can survive the harshest of conditions and the toughest roads in the world, the Land Cruiser deserves its legendary status. 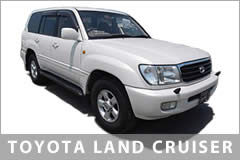 The Origins of the Unbreakable Land Cruiser
Perhaps an explanation for the Land Cruiser's outstanding hardness and durability is its origin as a military vehicle. If we want to understand its history, we must rewind to 1950, when North Korea invaded South Korea and the United States intervened on behalf of the South. The Second World War had not been long over, and at that time Japan was still under US occupation. It was the US military which commission Japanese auto manufacturers to create a compact four-wheel drive.

The Jeep BJ
Toyota had the specialists, the technology, as well as the experience to deliver the car the Americans needed, having built trucks for the Japanese army in the past. Thus the precursor to the Land Cruiser was born, combining the chassis of a one-ton truck with a powerful 3.4l petrol engine ? it was first called the Jeep BJ. The prototype, driven by test driver Ichiro Taira, managed to reach the No. 6 checkpoint of Mount Fiji, a feat that had been performed before only on horseback. The 4x4 soon became the official patrol car of Japan's National Police Agency and then two years later, it went into full production. The name by which we know it know, the Toyota Land Cruiser, was adopted in 1954.

In the decades that followed, Toyota constantly improved the Land Cruiser, making it not only more powerful and easier to maneuver, but also more comfortable and more civilian-friendly. The Land Cruiser quickly became a global success, with military forces, organizations, and individuals queuing to buy it.

Stronger With Each New Generation
One of the most iconic iterations of the Land Cruiser would be the Series 40, the third-generation installment also known as 'The Forty'. It hit the market in 1960 and remained a strong presence for 24 years, until the next generation, the FJ55, which offered car-like comfort, was released in 1967, followed by the Series 60 in 1980, the Series 70 in 1984, a major redesign, which was available in two flavors, Heavy Duty for outstanding toughness and Light Duty for a more comfortable family experience, the Series 90 in 1996, the Series 100 in 1998, the Series 120 in 2002, the Series 200 in 2007, the most powerful Land Cruiser to date, and the Series 150 in 2009, which is hard on the outside but smooth inside. Since its initial release, the Land Cruiser has sold a whopping 6.5 million units, being one of the best-selling cars in history.

The Great Land Cruiser
The Land Cruiser isn't just extraordinarily strong, so strong that it can withstand the most rugged, rock-strewn roads. It is at the same time remarkably comfortable for a car of its type, with the latest models providing as much comfort as any compact car, and a higher level of safety. Another awesome thing about it is that due to its impressive continuity, with models enduring for decades, the core parts of the vehicle remain extremely similar and can be easily changed. A Land Cruiser is not likely to require repairs often, and when it does, the wide availability of parts make it extremely straightforward.

The Toyota Land Cruiser is an outstanding, unbreakable car, one that is considered by many to be one of the best 4x4s ever made. But there is no secret behind its durability and popularity. Except, of course, for quality.