Gas prices are on the rise once again leaving less money in your pocket and more pain at the pump. Perhaps you've considered replacing your vehicle for something more 'fuel friendly,' but don't want to look like "that guy" driving around in what looks like a toy car. Lucky for you, here are 10 popular vehicles on the market that are both fuel efficient and stylish. 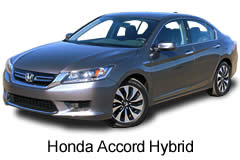 1. 2014 Honda Accord Hybrid
The Honda Accord is one of the most popular vehicles on the market and the hybrid option makes one of the best cars for both fuel efficiency and appearance. The Accord Hybrid boasts an astonishing 50-mpg in the city and 45-mpg on the highway. Prices starting at $29,574, it is also an affordable option for the average consumer looking to save some money.

2. 2013 Tesla Model S
For those willing to give up gasoline altogether, and shell out a little extra money, the 2014 Tesla Model S is the second best option on the market. The Tesla Model S runs off a 60 kWh battery pack that can get you up to 300 miles on a single charge. The entry price for such a vehicle is around $69,900, but it is a truly stunning vehicle packed with tons of features that you'd expect from a luxury vehicle.

3. 2014 Honda Civic
The Honda Civic starts at $18,118 and offers 30-mpg in the city and 39-mpg on the highway. Civics are known for their reliability, and are ranked #3 by U.S. News for most affordable small cars on the road.

4. 2014 Toyota Camry
Starting at $25,519, the Toyota Camry is the #1 most affordable midsize car according to US News. It offers 43-mpg in the city and 39-mpg on the highway with a hybrid option for those interested in an electric vehicle. Camrys are known for their spacious interior offering ample legroom and comfort, especially long-haul trips.

5. 2015 Honda Fit
Ranked #1 for most affordable small car, the US Fit resembles the look of a Toyota Prius in some ways; however, the back of the vehicle is much more rounded and almost looks like a compact minivan. This is an excellent car if you value affordability but require room to haul kids or passengers around. It starts $15,525 and features 33-mpg in the city and 41-mpg on the highway.

7. 2014 Honda Insight
Yet another Honda making the list, the Insight is a hybrid option that switches between a gas engine and electric motor to come in at 41-mpg in the city and 44-mpg on the highway. The car starts at $19,658, making it not the cheapest vehicle on the list, but one of the better options for fuel economy. The main complaints about this vehicle pertain to the interior design and the lack of features packaged with the entry price.

8. 2014 Ford Focus
The 2014 Ford Focus starts at $17,103 powered by a four-cylinder engine and renowned for its maneuverability and its ease on the road. It features 26-mpg in the city, and 36-mpg on the highway; not the most fuel efficient on the list but much less expensive than options such as the Tesla.

9. 2014 Lexus CT Hybrid
Lexus is well known for the craftsmanship of their vehicles and the 2014 Lexus CT Hybrid is no different. The reason that the CT comes in at #9 on the list is largely due to its price in comparison with some of the other fuel-efficient options. This car starts at $32,182, and features 43-mpg in the city and 40-mpg on the highway.

10. 2014 Mazda2 Sport
If you are looking for something inexpensive, the 2014 Mazda2 Sport starts at only $15,125 and features 29-mpg in the city, 35-mpg on the highway. The Mazda2 sport is a rather small vehicle with limited storage space, but has a sporty look and is great to drive.