If you notice that your car is emitting an unusually white or black smoke from the tailpipe, you need to investigate the issue as it can lead to a lot of problems if left unattended. Exhaust gases coming from your car's tailpipe should be colorless at all times, with just a slight blue-grey tint. So if there is white or black exhaust gas coming from your car than that should capture your attention immediately and if it persists it should point you towards a car mechanic. 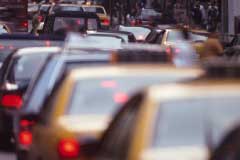 White smoke emitted from the exhaust pipe
If you notice that your car is emitting white smoke from the tailpipe, you have to look and see how thick the smoke is. In most of the cases, white smoke is not very thick and it resembles a vapor, which is not a cause for concern. This is often caused by condensed water found in the exhaust system and it should disappear if you let your car running for a few minutes.

However, if you notice that the white smoke emitted by your car is very thick and it doesn't disappear after letting your car idle for a few minutes, you most likely have a more serious problem. It is most likely an indicator that your engine is burning coolant and/or water, which it shouldn't. If you noticed that recently you had to fill up with water or coolant more often than normal, this is most likely the issue. The cause for this problem can be traced to a blown head gasket, cracked cylinder head or a cracked engine block letting water or coolant inside the cylinder. All of these are quite serious problems and should be fixed as soon as possible to prevent further damage. If engine coolant or water mix with engine oil and enter the cylinder it could very easily cause irreversible damage to the whole engine.

There is black smoke coming out of the car's tailpipe
If you notice that your car is producing black smoke from the exhaust pipe, it is very likely that the engine is burning excess fuel that shouldn't be there. This happens when there is more fuel than needed in the mixture of fuel and air that enters the cylinder. As a result, the rich fuel mixture is not completely burned in the combustion chamber and the result is a black smoke coming out of the exhaust pipe. If this happens to your car, the first thing you should do is check the air filter; if you are lucky, changing a dirty air filter will solve the problem. If you have a new air filter or you don't notice any difference after doing so, it's very likely that you have a more serious problem with the engine. A rich fuel mixture can be cause by a number of different factors, including a leaking or dripping fuel injector, a stuck closed fuel regulators, a restricted fuel return line or even a faulty ECU.

All of these are serious problems and not fixing them as soon as possible can cause a lot of damage to the engine. You shouldn't try and fix them yourself if you don't know exactly what you're doing; instead get your car inspected by a specialist mechanic before the problem worsens.

Wrap-up
Smoke coming out from your car's tailpipe can be very unsettling for any car owner. Make sure that it is a real problem before panicking and if the black or white smoke persists even after letting the car run for a few minutes you have to get it inspected before the damage done is irreversible.