How Many Types? Different Kinds of Car Keys - Vol.163

Car keys come in a lot of different shapes and sizes, with a lot of different features, such as remote control to unlock the doors and alarm or even keyless entry. It is not very well known the keys for virtually all the cars produced in the last 15 year are actually three keys in one. 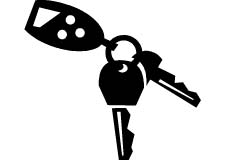 The Mechanical Blade
The first part of a key is the mechanical blade (the part that looks like a traditional house key) which is inserted in the ignition barrel in order to disable the steering wheel lock, allowing it to turn. This part can also be used to unlock the doors, the glove compartment and the trunk, depending on the model. This metal blade can also be straight with groove on the inside, the so-called "laser keys", which have to be made with precision cutting equipment.

The Electronic Chip
The second part of a key is an electronic transponder chip with a code inside, which is inserted in the plastic part of the key. The electronic chip is made of plastic (it doesn't need a battery) and a lot of people don't know their key has one because they don't have a remote locking system and/or buttons on their keys. But all the cars made in the last 15 years make use of this electronic chip, which reduces possibility of theft. The key is programmed to work only with your car and the car's onboard computer recognizes the key and the unique code and starts the engine. That is why you cannot use your key on someone else's car even if it's the same make and model. Modern cars use an electronic immobilizer system which doesn't allow the car to start if it's not the correct key (the mechanical blade might open the doors and turn the ignition, but the onboard computer won't allow the engine to start).

The Remote Control
The third part of a key, which is not as universal as the electronic chip, is the remote unlocking control, which allows you to lock/unlock the doors of your car and also enable/disable the alarm system (if there is one installed) from a distance. Unfortunately, this system needs batteries to work and in unfortunate cases, you might be able to unlock the door with the mechanical blade but the alarm can only be turned off with the remote control.

Some of the newer premium cars are using keys that don't have a mechanical blade at all, only having a plastic end that's inserted in the ignition barrel to start the car, while even newer models use a hands-free keyless system. With this system, you don't have to worry about your key at all; all you have to do it keep it in your pocket at all times. If the car is locked, when you get close to it, the car detects the key and, depending on the car, it either unlocks the door automatically or you have to touch a sensor behind the door handle for the car to unlock. Once inside the car, with the key in your pocket you only need to push a button for the car to start. When you leave the car, once you get far away enough from it, the car will lock itself automatically.

Vulnerability
You always have to make sure to keep your car key safe as it is the only weak point in your car's security. Without the exact key of a car it is virtually impossible to steal a modern car. With all these security features, it can also be quite expensive to replace your key if you lost it so make sure to always keep it close.