What Are Power Amplifiers and How Are They Used? - Vol.446 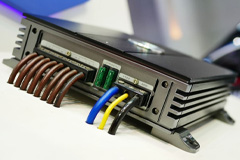 Amplifiers are the kind of devices that are used for amplifying weaker signals into a stronger signal. It can amplify various kinds of signals like audio signals, power, current, radio waves, etc. It simply tends to use the input signals and then increase its magnitude by many times using any type of external source of power to make it a stronger waveform. The amplifiers which use the electrical power source is called as a power amplifier and the amplified output is helpful in the output devices like transmitters, speakers and headphones.

Usually, the power amplifiers are effective only when the input signal is above a certain magnitude and therefore the signals are amplified using voltage amplifier and then the tone and volume controls are used to make audio adjustments and then it is finally passed through an amplifier which amplifies the power before feeding it to the speaker.

There are three kinds of power amplifiers depending on the kind of output device that is used for the final signals. They are:

Audio amplifiers are mostly used in audio devices like speakers, headphones, home theatres, mobile phones, etc. These help increase the magnitude of the audio waves that are fed from the input device and then transmit higher magnitude audio waves ranging from milliwatts to kilowatts.

The DC amplifiers are used for amplification of the magnitude of the pulse width modulated (PWM) signals. These signals are used in the actuators or the motors which require high power PWM signals.

Depending on the type of amplifier and classes of amplifiers, there are several applications of them which are listed below:

Industrial Applications: usually for the industrial uses the amount of power required is much higher and this is the reason why amplifiers are used to run the high powered systems without any disruption in the processes. There are many subtypes of direct current amplifiers which are used for major industry-based applications like powering up direct current motors and actuator systems for industrial uses.

Electronic Devices: today most of the electronic devices for the consumer use have amplifier systems installed in them. The devices like speakers, mobile phones, home theatres, headphones, TVs, concert and theatre musical systems, etc. all have power amplifiers in them to increase the magnitude of the audio output along with higher quality.

Wireless Transmission: for any kind of wireless communication and transmission, there is a need for steady radio waves. For the radio waves to transmit there should be enough power in it so that it can travel for longer distances without getting weak and distorted before reaching the destination. Therefore, for this power amplifiers are used to increase the magnitude of the radio waves.pp