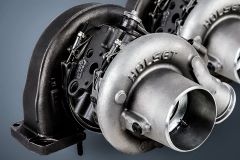 One way to enhance the horsepower of a car's engine is with a turbocharger. This will enhance the overall performance of the vehicle. A turbocharger allows an engine to produce similar power as that of a heavier engine.

A turbocharger is a turbine driven forced induction device that injects extra air at increased pressure, temperature and density into an engine's combustion chamber; thus improving the engine's efficiency and horsepower.

The exhaust gas that a turbocharger uses to operate is energy that is lost in a normally aspirated automobile engine. In cars, there are various types of turbochargers, and each has its own characteristics, drawbacks, and benefits.

Single-Turbo The single turbocharger offers excellent variability and is a cost-effective method of increasing power in a car engine. It is relatively easy to install, and the addition of a single turbocharger produces the equivalent power as that of a larger and heavier normally aspirated engine, thus increasing performance. However, the turbo response by the engine may not be as quick as with other turbo configurations. Twin-Turbo Similar to single turbos there are several options when considering a twin turbo. A single turbocharger can be added to each cylinder bank regardless of whether the engine is a V6 or V8. For parallel twin turbos on "V" shaped engines, the benefits, as well as the drawbacks, are the same as with the single turbo. They can be placed sequentially or in other configurations that enhance the engine's torque and power. Cost and complexity can be a disadvantage as it is doubling the number of turbo components required.

Twin Scroll-Turbo Cylinders can be programmed to feed to one particular scroll or the other thus allowing for the enhancement of horsepower by maximizing the efficiency of the turbocharger. The addition of a twin scroll turbo will allow for more energy to be translated to the wheels. Let your wheel supplier guide you on this. Different scroll designs allow for a wider RPM range thus enhancing the effective boost of the turbocharger. Installing a twin turbo requires a specific engine layout and exhaust design when compared to the traditional single turbocharger.

The best way to enhance the performance of any car in a cost effective manner would be to install a turbocharger. It is also important to consider what your car is capable of, such as the torque your wheels can handle, the force the drive shaft can handle and the speed you, as a driver, can handle.