Healthy adults are supposed to pass gas an average of about 10 times a day, and even up to 25 times a day is considered normal by scientists. It can be so embarrassing that when there's the smell of gas (or fart, to be less politically correct) in a room, sometimes nobody would fess up. In a car, however, it'd be impossible to deny the fact you had to let one go. Not to mention that it would be smellier due to the confined space, so it's a good idea to know how to limit the production of gas if we're going on a long car ride. 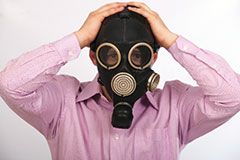 1. Limit Intake of the Most Offensive Foods
Hydrogen sulfide is the gas that gives fart its bad name. It actually consists of multiple gases but hydrogen sulfide is the one that makes it smell rotten. Therefore, limit the amount of hydrogen sulfide produced in our digestive system to curtail the offensiveness of gas. The main culprits here are protein-laden foods, especially meat, cheese and eggs, which can cause up to ten times more production of hydrogen sulfide. In addition, if one will be sitting in a car with other people in Southeast Asia, it's a good idea to avoid the popular local fruit durian, which is not only rich in protein but will add its strong unique odor to the gas!

2. Keep the Proper Habits
We are more likely to fart if there are more gaps in unprocessed and processed food in our digestive system that would allow gas to accumulate. These gaps can come about in a number of ways, including eating and drinking too fast and in big gulps, drinking carbonated beverages, smoking and hyperventilating while eating. Therefore, try to eat with small bites, avoid carbonated drinks, smoke less, and stay calm before and during a car ride.

3. Watch out for Food Intolerance
About 65% of people have some form of lactose intolerance. Lactose is a natural sugar found in milk and dairy products, especially ice cream and yogurt that we can easily overeat. While major levels of lactose intolerance can cause more serious health effects, slight intolerance from consuming too much lactose is enough to result in major gas episodes. It's just not a good idea to consume too much lactose, regardless of your level of intolerance, before a long car ride. Besides lactose, if your stomach is intolerant to other ingredients such as nuts and shellfish, you should definitely avoid them as well.

4. Take Preventative OTC Medicines and Supplements
The most commonly available over-the-counter medicines for reducing and eliminating gas problem, usually before it began, are antacids and activated charcoal tablets. Taken before or right after a meal, they can remove gas from the stomach before it gets down to the intestines. Another effective product is probiotics, which contains live bacteria and yeasts to replenish the stomach for optimum digestion, and thus promotes the elimination of gas.

5. Exercise Physical Control
Imagine sitting in a car with 3 other people and you really have to fart. Instead of letting it rip, you have the option of trying to control and stop it in its track. Sometimes it will just go away! It's also helpful to loosen the clothing (if it's too tight) in such situations.

6. Observe the Proper Etiquette
Okay, there's no other choice and you simply have to fart. Don't just do it, put the car windows down and forewarn your fellow passengers. It will be a lot less embarrassing this way. If there's a major gas storm coming, it'd be a good idea to pull up (or ask the driver to pull up) at a rest area or gas station.

If all else failed and we accidentally farted in the car, what then? No big deal, just have a laugh about it. Maybe look up the medical definition of flatulence, change the subject and talk about that instead. In any event, it's not the end of the world!