Importance of Wearing a Seatbelt - Vol.345 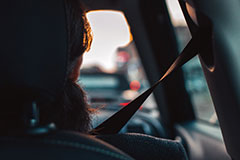 Seatbelts Save Lives
Although front seatbelts are required by law in all developed and developing countries, not all drivers and front passengers wear a seatbelt on a regular basis. Even the most law-abiding persons often remove the seatbelt before the car come to a complete stop. In Southeast Asia, front seatbelt wearing rate ranges from a low of 58% in Thailand to a high of 82% in Singapore (which is about the same as the United States at 84%)*. This is despite the fact that almost all adults are to some degree aware that seatbelts save lives!

Rear Seatbelts Are Even More Effective
As for the rear seatbelts, they are generally, though incorrectly, assumed to be not as important as the front seatbelts. This is evidenced by the fact that the compliance rate of wearing rear seatbelts is much lower than the front in every country. For example, in Malaysia (together with Singapore and the Philippines are the only three Southeast Asian countries with front and rear seatbelt laws) the rear seatbelt wearing rate is only 13% compared to 77% for the front.

It is ironic because an unrestrained rear passenger could crash into the front seat with such force as to cause serious injury or death to a law-abiding, seatbelt-wearing front passenger. To put it into perspective, according to the World Health Organization (WHO) wearing a front seatbelt can reduce the risk of fatal injury by 50% while wearing a rear seatbelt can reduce the risk by a whopping 75%!

Work Together With Airbags
In this day and age when front airbags are standard accessories, unquestioning belief in the life-saving property of airbags often devalues the importance of seatbelts. The reality is airbags are designed to work in conjunction with seatbelts, not independently or in place of seatbelts. Without a seatbelt, an airbag might not expand fast enough to cushion the forward momentum of the occupant, and in certain cases, plowing unrestrained into an airbag has been known to cause death by suffocation.

Safety of the Future Generations
Children in a car are most vulnerable to getting flung in the event of an accident. Seatbelts work on top of various child restraint systems, each tailored to the height of the child, to significantly reduce the fatality rate of children in car accidents.

Additionally, for pregnant women, wearing a seatbelt is critical to the protection of both mother and child. Seatbelts are also aptly known as safety belts ? they are perfectly safe for even heavily pregnant women. It may be slightly uncomfortable for an expectant mother, but wearing a seatbelt will not harm the baby at all, and it greatly reduces the fatality risk of the mother, without whom the fetus's chances for survival is grim.

All in all, if we really think about it, there's no reason for not wearing a seatbelt every time. Just like we don't take off the seatbelt during a roller coaster ride, maybe we shouldn't take it off anytime during a car ride as well.