When Should I Use Neutral Gear with Automatic Transmission? - Vol.340

'N', or 'Neutral', is a gear that has confused many owners of automobiles with automatic transmissions over the years. Sometimes the owner's manual doesn't tell you when to use it and sometimes your parents or driving instructor didn't explain the use very well. It is surprisingly common to find people that either never use 'Neutral' or they just aren't sure when or why to use it. There are a lot of opinions on both sides of the fence, and many people will tell you that switching to neutral will damage your transmission. To clear up the conversation we have to talk about the times when you should use the neutral gear: 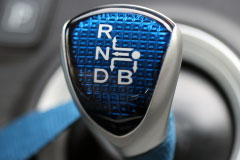 When you're stopped in traffic:
If you're stopped in traffic or at a red light, it is a good habit to switch to neutral until the light goes green. Many people will argue that switching to neutral all the time can wear on your transmission. In some cases this is true, but this is less damaging than the alternative. When you stay in 'D' or 'Drive' while stopped, you are using transmission fluid and slowly wearing down the transmission clutches as well as heating up and wearing down your brake pads by preventing the car from driving forward when that is what it wants to do. In older cars, the automatic transmission doesn't cut fuel to the engine when you are stopped in drive which means that switching to neutral can also save you some fuel. Plus, lifting your foot by accident can cause an accident, so switching to neutral when stopped can give your tired feet a short-lived rest! Just make sure you're not stopped at an incline that would cause your car to roll into someone else's, and be quick to switch back to drive when the light goes green.

Tip: DO NOT shift into 'P' or 'Park' when stopped in traffic. This can lead to critical transmission damage and eventually failure.

When you need to push the car:
If you've ever stalled out in the middle of the road or out on the highway, you know the sinking feeling of wondering how far away you're going to have to push. If you have a hand or two, however, it's not as bad as it might sound. This is the situation where 'N' really shines. Just pop it neutral and start pushing, with somebody controlling the steering wheel (of course) and you can get to a safe spot pretty easily. Also, if you're ever stuck in mud or snow it can be a huge help to push the car out of the slippery situation.

When towing the car:
Before towing your car, you should always consult your owner's manual on the proper guidelines for towing. Towing your car in neutral is not the suggested method, but sometimes you are left with no choice. If the towing company lacks a tow dolly and you have to flat-tow, keep the car on and set it in neutral to minimize transmission damage. Better to have a worn transmission than be stuck in the middle of nowhere!

Additionally, some people like to coast downhill in 'Neutral' but this is not recommended. It doesn't save fuel except in edge cases, and while it doesn't actually wear down your transmission much differently than if you were in 'Drive', you will have slightly less control when coasting (as accelerating improves traction) so it becomes less of a maintenance issue and more of a safety one.

Many people incorrectly think that one should never switch to 'N' unless performing certain repairs. In reality, the 'Neutral' gear exists for a reason and should be used regularly when applicable. As always, be sure to drive safely!