For many years Japan's Kei cars have provided the domestic market in Japan a car that is efficient, practical, economical, adorable looking and of course a whole lot of fun to drive. They have sold solidly in Japan for decades now and are just as popular today as ever.

Here we want to take a look at the most important aspects of a Kei Car that make them such a great fit for so many Japanese motorists. 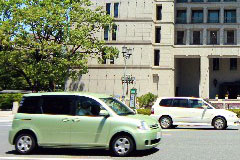 Economy
These little cars are designed with tight spaces, tight parking and very narrow roads and turning circles in mind. So naturally they are made as compact and lightweight as possible.

The doors are thin and mobile and the structure inside kept as trim as possible. The chassis and wheels are kept as small and thinly structured as possible as well and as little paint as possible is applied as well. Glass and heavy instruments are avoided as much as they can be.

The cars may not be as luxurious as many western consumers would hope for, but they are very plain and light in terms of weight. This makes them unbelievably fuel efficient as the car requires very little energy to move around. It means the engines are usually very small and sufficient, meaning maintenance and repairs are very affordable relative to larger power units. Overall the value of the cars and maintaining them is drastically lower than those of a standard compact road car, as for people that just need a way of getting around town, these facts are hugely appealing.

Made for Domestic Use Only
At the moment, these tiny personal vehicles are made by Japanese manufacturers solely for the Japanese market. Much like Americans in the states, there is a certain patriotic understanding for Japanese people towards Japanese made goods.

The fact that they are purely a Japanese product, designed with a Japanese ethos and mentality specifically to suit the lifestyle and desires for Japanese people, gives them almost a cult following appeal. This is a novelty aspect that makes them greatly appealing.

The problem is from the manufacturer's perspective, this is not so much the case. In today's market gigantic sales volumes are a huge part of the automotive industry. The kind of scale you only get from exporting overseas. This makes the Kei car even more unique, and actually sadly more of a product likely to die out in the near future.

Suits Japan's Geography
Japan is essentially a cluster of loads of little islands. Generally this doesn't mean a whole lot of space is usually available. From major cities, to small remote towns, the Japanese architecture and landscape is generally engineered to make very efficient use of limited spaces. The Kei fits right in with that way of life. It's pretty much a car that wouldn't necessarily work as well in terms of sales for any other part of the world or for any other people.

But for the Japanese, it suits such a wide range of demographics within the country's population, that sales have remained very strong for decades. From young to old, Japanese people find the cars have unbeatable practicality for city and country life alike, economical costs and cute aesthetics make the car too fitting to their needs to pass up for other less suitable mass produced options.

Reliability
One of the best things about simplistic and elegant engineering, is that the less complicated something is, the less things can go wrong with it. Range Rovers have a poor reputation for being incredibly unreliable purely because they have so many functions and capabilities, the simple fact is there are just so many parts that can stop working.

When you have a car with only a simple 1 liter engine, limited electrical components and no advanced heavy systems or features, breakdowns are typically rarer. And when things do go wrong, the costs for repairing them is significantly lower.