The Wakaba mark has been around since the early 70s. It was first introduced to help distinguish beginner drivers in traffic. While still serving the same purpose these days, the popularity of this leaf symbol grew so much that it ended up being the main indicator of beginners in other fields as well. 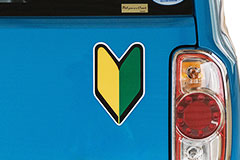 What to Do When You See the Wakaba Sticker on a Car
The sign is easy to recognize due to its use of bright green and yellow. The sticker is mandatory for the first year of driving in Japan and it should be placed both in front and at the back of the car. Unlike other driver signs, the Wakaba has not changed in design since it was first introduced.

So what's expected of other drivers when they see a beginner car in front of them? Generally, common sense and patience are required. Just as how things work for drivers wearing the elderly sticker, you should be extra careful when encountering a beginner on the street.

It is recommended that you don't force him into making quick decisions to satisfy your driving style. For when common sense fails, Japan also has traffic laws in place to help protect beginners from aggressive drivers and the other way around.

Experienced drivers are not allowed to pull up alongside a vehicle sporting the Wakaba sticker. They are also not allowed to cut in front of beginners unless it is unavoidable. These actions result in fines and losing one point on the driver's license.

Penalties for Not Using the Sign as a Beginner
Being a novice may be hard for some to accept. This is true for any culture including Japan's. While some new drivers may feel embarrassed about using the Wakaba sign, others appreciate the perks associated with it.

To make sure few people resort to ditching the sticker, authorities can punish drivers. If you are found not wearing the Wakaba on your car when you should be, you will be given a fine and deducted a point from your driver's license

There is an official limit on how long you can leave the Wakaba stickers on a vehicle. If the first year is over but you still lack confidence you can still keep them on. This is similar to how the Momiji mark (for elderly drivers) works. Drivers under 70 can use the sticker too if needed, even though it is only required by law after the age of 75.

Using the Wakaba mark in your second year of driving does not result in a penalty. You are only fined if you don't use it in your first year.

Other Popular Uses
The Wakaba mark has become so popular that it is accepted as a beginner symbol in many activities. The leaf symbol is used in games to hint at novice or beginner skill levels. There is also an emoji of the yellow and green leaf which people can use to express their opinions on someone's level of knowledge.

It is not uncommon to find the Wakaba symbol on sports uniforms as well. It can denote a particular student's level or an entire team's affiliation. It is also not uncommon to see the Wakaba stickers on cars outside of Japan. However, not many drivers outside the country use the symbol for the same purpose. Some will simply apply it as a cool colorful decal.

Conclusion
The Wakaba sign is easily the most recognizable symbol related to driving in Japan. It is the oldest one introduced to differentiate drivers in traffic. The variant for the elderly wasn't introduced until 2011.

When you encounter a beginner driver in Japan it is recommended that you offer patience and freedom instead of acting aggressively. To make sure this happens, there are somewhat strict penalties for not respecting beginner drivers in traffic. On the other hand, it's never a good idea not to use the Wakaba sticker in the first year of driving.