As vehicles become more and more advanced the question of safety is becoming increasingly common. Many manufacturers, such as Volvo, take the safety of their vehicles extremely seriously but the fact remains that a driver's braking time and reaction speed is often critical when it comes to avoiding collisions or mitigating the damage should a collision actually happen.

Many manufacturers have attempted to aid in the issue somewhat, with a number of more modern vehicles including technologies such as sensors that indicate the proximity of objects in relation to the car to better aid the driving of the person operating the vehicle. However it is only in recent years that technology has begun to appear that could eventually eradicate the issue altogether. 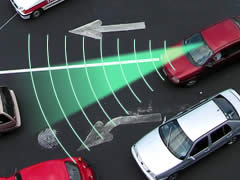 Automatic Braking, otherwise known as Autonomous Emergency Braking (AEB), is a huge leap forward in regards to vehicle safety. Should such systems become widely implemented they will play a huge part in reducing collisions on the road, which in turn will make driving a safer experience for everybody.

The system uses a combination of radar, laser and other sensor technologies to warn the driver of an impending collision. Better yet, should the driver fail to react in time to the issue, the system will automatically prime the vehicle's brakes and perform an emergency stop, taking control of the vehicle away from the driver for a short period of time and often reacting to the issue faster than the driver would have been able to. It's an idea that has plenty calling for wider implementation of the system and offers an array of benefits.

Cheaper Insurance Bills
Even the most minor of collisions often require bringing insurance companies into the mix. If any damage is caused on either vehicles the drivers will often need to exchange insurance information and the issue can affect everything from the premiums the driver pays from then on through to no claims bonuses.

With automatic braking the possibility of accidentally increasing your insurance payments drops dramatically, as the vehicle becomes capable of reacting at speeds that are often beyond those of the average human.

Saving Lives
While minor fender-benders are an inconvenience but generally not life threatening, the technology really comes into its own when operated on a car that is traveling at high speeds. For example, should you choose to take your vehicle out on the freeway you will often be travelling in excess of 70mph. While this is almost always a thrill, and is often one of the few times that you can really let loose with a car and experience all of the power you don't get to utilize on a standard drive, it does come with its own set of safety hazards.

Automatic braking can again reduce the risks involved with driving at such high speeds. Assuming that the driver and all passengers have taken the proper safety precautions, such as wearing their seat belts correctly, their vehicle will be able to detect any upcoming potential collisions and, if the situation calls for it, will lock on the emergency brakes just as quickly and effectively as if the vehicle was traveling at a slower speed.

The Drawbacks
On the surface there appear to be no drawbacks to the system and, if anything, it sounds like a positive step for the automotive industry as a whole. However some have raised concerns about not having control of their vehicle at all times, should the system be called into action, and there is always a niggling concern that a driver could become too reliant on it. Doing so would be a mistake and it is always recommended that a driver continue to utilize their own skills to the best of their abilities, however automatic braking will certainly provide excellent backup should the need arise and it is likely that we will see the technology being increasingly adopted over the coming years.