How Timing Belt Works And What Is The Timing To Change It? - Vol.214

There are many moving parts necessary to make your engine operate and to keep your vehicle in motion. A timing belt is essential to ensuring that all of these activities are synchronized and in motion at just the right time. 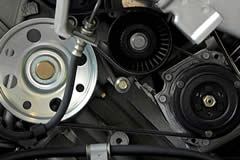 Basic Facts About The Timing Belt
Timing belts are located towards the front of your engine wrapped around what appears to be several gears. The timing belt works in conjunction with the camshaft and the crankshaft. The camshaft is in charge of letting fuel into the engine cylinders to be ignited by a steady rotational movement of cylindrical objects known as cams. The crankshaft regulates the movements of the pistons and helps push them back down after igniting.

The timing belt rotates around the engine block moving these parts to ensure that everything moves in the right order and at the right time. During the process, timing belts also help operate the water pumps that cool the engine and provide heat and air conditioning to the cars interior. These belts are made out of either rubber or a metal chain. Rubber performs the job quiet and is installed on most modern vehicles, but also runs the risk of breaking or snapping due to its inherent material flaws.

Recommended Replacement Guidelines
When a timing belt breaks, the entire rotation comes to a halt and your car will abruptly stop running. You should avoid this problem at all costs by replacing your timing belts once every 60,000 miles. If you don't you could be risking a lot more than the cost of towing your car to a local mechanic.

When the timing belt breaks while you are driving and everything is still in motion, the parts within the engine will starts to slow down naturally until they finally come to a stop; however, without a timing belt, there is nothing to keep everything synchronized or in order, so everything will be moving at its own pace. If the pistons and shafts within the engine collide as a result, it could cause catastrophic damage to your engine. To put this into perspective, the average cost of a brand new engine will run you at a bare minimum at least $1,000-$1,500, and labor alone could double this estimate.

Long before the 60,000-mile point occurs, you should periodic regular visual inspections on your timing belt so that you can reduce the risk of a break occurring. Locate the timing belt using your owner's manual or a maintenance guide specific to your vehicles make and model.

Timing belts have small grooves on the inside that work to make all the shafts move. Use a flashlight and check to see if the grooves are in tact or if there is significant wear and tear on the belt itself. The belt should have no slack in the line should be drawn tight. If you notice any irregularities, tearing, or significant wear on the belt, you should take your car in to have this part replaced.

When you go in to replace the belt, your mechanic will most likely recommend that you also replace the water pump. Your mechanic isn't trying to jack up your bill, he is making this recommendation because timing belts and water pumps have similar lifespans before requiring replacement. Replacing the water pump at the same time will help keep everything in working order and reduce your total cost of repair labor.