How Did Toyota Become World-Famous? - Vol.213

You might be surprised to find out that Toyota didn't originally start off as a car company. In fact, the company was first launched as the Toyoda Spinning and Weaving Company in 1918, under the direction of its founder Sakichi Toyoda.

Toyoda was accredited with designing the nations first power loom in the late 19th century, and automated loom in 1924. These two state of the art inventions and Toyoda's interest in engineering led him to explore gasoline-powered engines in 1930, and ignited his popularity among the Japanese government. 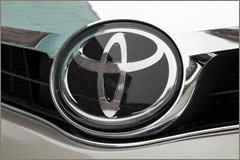 Increase in demand for motorized vehicles leading up to WWII led the Toyoda to come into the service of the Japanese government in order to help produce passenger vehicle engines starting in 1934. The first model was released in 1934 known as the "Type A Engine," and was fitted into A1 passenger cars and G1 trucks the following year. This then led to the production of the company's first car in 1936, the model AA Sedan.

Toyota Motor Company, Ltd., Was Established In 1937
The company struggled during WWII due to allied bombing efforts and the eventual U.S. victory over the Japanese islands. These bombings destroyed factories and manufacturing plants, forcing the company to suspend all operations until the end of the war.

Following the war, executives from the company began touring operations of U.S. manufacturers like Ford Motor Company to establish an understanding of American technological superiority. The company still faced challenges due the rampant inflation within the country, nearly facing bankruptcy and employees insurrection following the request that nearly 1,600 employees be laid off. Despite challenges, the company managed resume production in 1950 while implementing much of what they had learned from their research acquired in America.

Toyota Came To America in 1957
The first overseas expansion efforts by Toyota occurred in the United States and Brazil in 1957. The company designed the Toyopet Crown for the American market that failed abysmally because it was considered expensive at the time and lacked significant horsepower compared to American models currently on the market; it was discontinued in 1961. In the meantime, the company was making substantial profits off the U.S. war effort in Korea by selling vehicles to the United States military.

Toyota's second attempt in the U.S. market? the Land Cruiser?faired much better, and the company was able to later remarket and redesign the Toyopet Crown as the Toyota Corona in 1965. The Corona was a success and led to the company's rapid growth and production of popular models such as the Toyota Corolla which are still some of the top selling vehicles today with a record of 30 million cars sold.

Throughout the 60's, the company began exporting their vehicles in large numbers and outsourcing production to Australia. Toyota's entry into the European market began in Denmark in 1963, outperforming their Japanese competitors Nissan, and buying up subsidiary companies throughout Japan in large numbers.

In the 1970's Toyota became America's #1 importer, surpassing German made Volkswagen and selling their milestone 1-millionth vehicle. The company continued to excel even with the Iranian oil embargo of 1979, and by the very end of the decade, the company had exported 10 million vehicles overseas.

Toyota Designs Quality and Luxury
During the late 80's and throughout the 90's American demand for luxury vehicles was at a all-time high. Toyota responded with the Lexus, Scion, and the Camry. The Lexus and Scion were so overwhelmingly popular, they beat out brands like Mercedes and BMW year after year, and resulted in an astonishing 2 million vehicle sales in 2004.

Toyota took advantage of every opportunity that came their way, producing the Prius and becoming one of the first major auto manufacturers to put out Hybrid vehicles. As a result, in 2008 during the peak of the U.S. and international financial crisis, Toyota flourished and managed to take the crown as one of the most world-famous carmakers in the world, and #1 selling car on the road in the entire United States.