What is Blended Petrol at Petrol Station? - Vol.198

Whenever you stop at the petrol station to put gasoline into your vehicle, you are fueling your vehicle with some type of blended petrol, or small ratios of ethanol and gasoline. The additives are put into place to protect the quality of the environment by reducing harmful emissions. Even unleaded gasoline has small traces of ethanol in it, but oil producers are beginning to tout specialized blended petrol in addition to some of the unleaded brands and diesel that you may have come to know. So what is blended petrol and how is it any different than the unleaded brands that you've used for so many years? 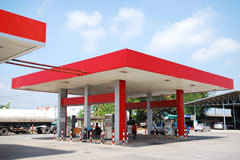 Some countries such as the United States and Brazil have regulations set in place that require that all petroleum undergo oxygenate blending to minimize the harmful emissions such as smog. This blending is performed by mixing together ethanol and petroleum to obtain a certain oxygen makeup which is why you will see an ethanol rating next to each gas gauge as you are selecting the type of gas that you would like to dispense. Most modern vehicles will operate without problem when the content of the ethanol to petrol ratio is 10% or less. Other vehicles that are being produced categorized as "flex-fuel" vehicles can operate on higher percentages of ethanol mixtures.

The process of blending petrol starts by the collection of ethanol from agricultural feedstock including sugarcane, corn, potatoes, and some other common crops. Collecting the ethanol from these sources is similar in many ways to how alcohol is produced, as a process of fermentation must be undergone; from the fermented crops, ethanol and carbon dioxide are the two products. After the fermentation, most of the water needs to be removed from the ethanol so that it can burn with the gasoline when firing the engine. This process is known as distillation and then dehydration.

Some problems with ethanol being mixed into gasoline are that ethanol takes in water molecules from the atmosphere, which can decrease the quality of gasoline going into the car. If water is permitted to get into the car's gas tank when filling your vehicle, damage could be done to the car such as damaging your vehicles carburet; the carburetor which is in charge of mixing air and gasoline to power your engine. This is a particular problem during the winter months as the weather can be rainy and bleak. Another problem seen in these blended petrol products is that they have the opportunity to decrease your fuel efficiency. Ethanol does not contain as high levels of energy content as does unleaded gasoline resulting in lower fuel economy.

If you have seen some of these new pump stations in your area, these stations draw in gasoline from two separate tanks to blend together a mixture of ethanol and gasoline for your vehicle based on your specific vehicle specifications. E-15 blended petrol is the lowest classification of true blended petrol that contains 15% ethanol and 85% gasoline. These ratings go all the way up to E-85 that contains anywhere from 51-83% ethanol and the remainder being gasoline. The E-15 classification of fuel should be safe to use by any vehicle manufactured after 2001; however, the E-85 blend ethanol blended petrol can only be used by flex-fuel vehicles.

If you were to insert this high level blended petrol into any other vehicle, the vehicle would be able to operate, but over time part system would begin to deteriorate. If you are driving around a flex-fuel vehicle and you are willing to sacrifice a little fuel economy to help the environment, you'll be pleased to know that blended petrol can sometimes run anywhere from 40-60 cents cheaper than unleaded gasoline; however, if you are driving a vehicle that is not equipped with these energy saving capabilities, it's best to pay the extra money and maintain the health of your car and the quality of your fuel economy.