Short for "dynamic", the Toyota Dyna is a medium duty truck that is designed for use in the commercial industry. The Dyna's platform was primarily based on the Toyopet Route Truck RK52, and in 1959 the route truck's name was changed to Dyna. Since then, the Dyna series has seen many model transitions, but has stuck to its roots as a heavier duty commercial truck.

The light-to-medium duty Toyota Toyopet Light hit the market in 1954. Two years later the vehicle's name was changed to the present day Toyota Toyoace, and it offered a 1.0-liter, 995 cc engine. This work truck was similar to the Dyna, but was not meant to handle as heavy of loads. 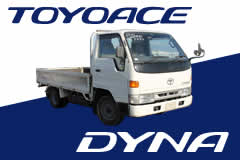 The Series
Until the Dyna and the Toyoace lines were fully merged, they functioned on completely different platforms. The Toyoace was designed to be a lighter duty truck and functioned on the Y-series platform, whereas the stronger Dyna functioned as a U-series. After the trucks were consolidated, the different series, Y and U, were stilled used. Trucks assigned to the Y-series were of a lighter payload, while the heavier duty trucks were designated as U-series.

For example, in 1984 Toyota introduced a light rear wheel drive model called the Rino. This truck functioned on the Y30 platform and offered a 3.4-liter engine. In the same year Toyota launched a model called the Dyna 200/300/350 and designated it as the U60 series. This truck featured a 3.7-liter diesel engine and a 2-3.5 ton payload, depending on the corresponding model number.

By 1995 the sixth generation of Toyoace was on the market and was fully merged with the Dyna line. Although the names differ, the models share the same design and are only separated by their individual sales channels. Four years later, Toyota rolled out the first four-ton model ever released for the Toyoace lineup.

Upgrades
Through innovation, the Dyna and Toyoace saw a marked increase in overall versatility in 2005. The Dyna "Tipper" model was fitted with a newly designed three-way body that allowed for a 50-degree rear tipping angle, as well as a side-tipping angle of 45-degrees. This "tipper body" was manufactured separate from the truck, and was then assembled at Toyota's production center. This ensured quicker delivery to customers and better overall availability.
In 2007 the Dyna's engine was overhauled to provide more power and to meet the Euro IV emissions standards. Prior to this update, the Toyota Dyna and Toyoace dropsied, tipper, and chassis models featured a 2.5-liter D-4D engine. The new 3.0-liter D-4D provided a much-needed boost in power, bumping output from 89PS/103PS to 109PS. Furthermore, the line's torque capability increased from 260Nm to 286Nm.

Pros and Cons
The Toyota Dyna and Toyoace have various benefits that should be considered. Firstly, the most recent models of the Dyna and Toyoace feature a hybrid drive system. This unique feature is a differentiating factor in a work truck because it allows for better fuel efficiency. Furthermore, harmful emissions can be reduced through the use of this type of drive system.

Secondly, the flat front end of the vehicle paired with the large glass windshield provides excellent visibility for the driver, which can be crucial when maneuvering through commercial work zones. In addition to this, the Dyna and Toyoace are available in the chassis cab, tipper, and dropsied bodies. The user also has the choice of a standard, medium, and long wheelbase with payloads that vary from 1000kg to over 1800kg. These functional choices make this model a versatile vehicle that can be suitable for various needs within industry.

The fact that this is an industrial vehicle means that the amenities are sparse. Legroom in the Toyota Dyna and Toyoace may be inadequate for taller drivers, and is not the best choice for longer trips. It has also been reported that the water pump in the 2.0-liter and 2.5-liter diesels has a tendency to break up and affect the timing belt.

This truck has withstood the test of time, and has proven that it can be a valuable addition to any work fleet.