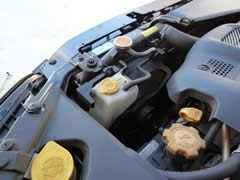 A radiator works to cool the engine block by circulating a liquid around the engine; the liquid then acts as a heat sponge, absorbing the heat produced by the engine and transferring it away from the engine block where it can do damage. While water has an amazingly high boiling point for such a small molecule, it is far from an ideal coolant for the engine block. Water boils at 100oC (212o F) and freezes at 0oC (32o F); in both cases, the volume of water expands greatly. The steam that is built up when the water boils can damage the coils of the radiator which can, in turn, lead to leaks and faulty radiator function. If the radiator is not working properly, the engine is at risk of damage or breakdown due to the lack of heat that is being siphoned off by the liquid moving through the radiator.

Ethylene glycol or propylene glycol, however, do not allow for as efficient a transfer of heat from the engine block to the radiator coils; therefore, most automobile manufacturers recommend a 50/50 mixture of the coolant fluid with water. The water allows for an increase in heat transfer while not damaging the interior of the radiator.

The other advantage of having a mixed system is that the ethylene glycol/water or propylene glycol/water liquid is much less likely to freeze in cold weather environments. Water, unlike most other room temperature liquids, actually increases its volume when it freezes. The use of water in a radiator system could lead to disastrous results if the system were to freeze; the expansion of ice can cause the bursting of radiator lines which will then lead to catastrophic loss of fluid. A radiator without any coolant fluid in it will do nothing to prevent the engine block from overheating and destroying the engine itself.

In the case of a radiator leak, it is most advisable to have the car towed to a mechanic who can fix the leak and allow the radiator to work normally and safely. However, water can be added to the radiator system in only the most extreme cases. If this is being done, the car should be driven more slowly than normal, and the temperature gauge must be monitored to ensure that the engine does not overheat. This is a temporary solution and should not be practiced for long trips or for prolonged driving. Cold water should never be added to a hot engine, either; the rapid cooling of a hot engine block can crack the engine and destroy it.